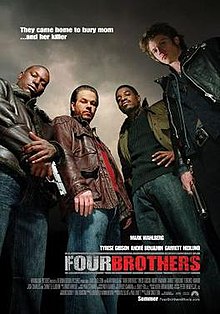 In honor of National Adoption Month, we’re featuring a few stories about adoptions and adoptive families.

Think blood is thicker than water?  Think again! This 2005 crime thriller was largely overlooked by critics (maybe because they were still having trouble admitting Mark Wahlberg into the acting circle).  It’s the tale of four adopted brothers who return home for the funeral when their mom is killed, but when they find out it was deliberate murder, they decide to take out the one who did it.  Detroit style!  (In other words, be ready for the violence.)

Even besides the story, this movie is worth seeing for all the notable actors, many of whom had not come into big-time fame yet.  The cast includes: Terrence Howard and Taraji P. Henson (from Empire), Sofia Vergara, Tyrese Gibson, Garrett Hedlund, and –the ever-amazing–Chiwetel Ejiofor. And lots more.  If it were me, I’d do a drinking game where you have to shout out the actors famous movie or show as soon as they walk on screen.  But that’s me.  And with this movie, it could lead to liver damage, so just nevermind that.