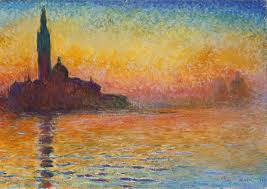 A group of bungling thieves-for-hire sneak into the museum by hiding in a statue of a horse and later pose as security guards to steal a roomful of Impressionist paintings. The robbery goes sideways almost immediately, however, when a real guard catches onto them and sets the alarm, locking the gallery. When the gallery is opened, Monet’s famous painting “San Giorgio Maggiore by Twilight,” is missing. NYPD Detective McCann suspects rebellious and rich Thomas Crown.

(For those of you who really care about the timing of this post, there is an exchange by two of the security guards who go to investigate the broken air conditioning. One says, “It would have to be one of the hottest days of the year.” And the other replies, “Can you believe it’s nearly October?”)
*Share your photos and celebrations on our Facebook or twitter pages.