In honor of Banned Books Week, we are sharing some reflections from one of our team members. Though not exactly bringing fiction into the everyday, we think that celebrating banned books is an important way to honor the value of all kinds of books in our lives. Even–and especially– if we disagree with them. 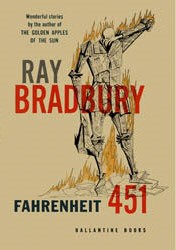 I read Fahrenheit 451 as part of my school’s summer reading program when I was 16 years old. The story is set in the future, where books have become illegal, and America employs firemen to find books and burn them. Author Ray Bradbury provides a convincing and relatable near-future, making the book terrific as science-fiction alone. In this future city, the trains are pushed by currents of air, the fire department uses a lethal robot to help it track criminals, and televisions have grown to wall-size. But, Bradbury goes beyond science fiction by providing insights into the inherent value of books.

The main character, Guy Montag, is a fireman who begins to wonder if he and his colleagues aren’t missing something when they set books on fire. What is it in these books that make their owners risk their lives by housing them?  There must be something. Guy’s questions lead him to understand exactly how his culture got this way. In Bradbury’s perhaps-prescient future, books were not done away with by the government or some oppressive hierarchy as in books like Brave New World or 1984. Instead, people gradually chose to remove books from their culture. Books raise questions, state problems, cause trouble, and who really needs all that trouble anyway?  Better to just do away with them and be happy.

Fahrenheit 451 didn’t strike me as amazing right away. Clearly, it was a good book, but that was all.  Then, over the following years, I saw things and heard things that reminded me of the story. I watched extreme sports begin and grow. I heard a woman talk about going for a voluntary C-section, just to have the baby out of the way already. And of course, I saw televisions get bigger and better until they evolved into the plasma, high-def, blue-ray wonder we now see in stores.

The future comes; there’s no stopping it. The real issue is what we face the future with. Bradbury suggests that we take the accumulated body of human wisdom and stop making the mess of things that we generally do. As one character says: “We know all the … silly things we’ve done for a thousand years and as long as we know that and always have it around where can see it, someday we’ll stop making the … funeral pyres and jumping in the middle of them.”

Bradbury says that books are the reminders of what we as human beings have been, whether good or bad. That’s why the real danger in banning books is that when we discard them, we also discard a part of ourselves, leaving us less prepared for the inevitable future.