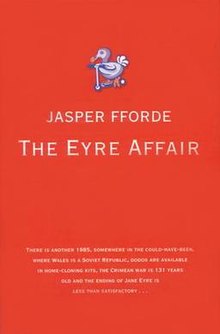 2016 was the official year that the father of Thursday Next gave her some advice (see our previous post), namely to stay away from Oxford, but he also gave a few other notes.

He also very clearly warned against being near Oxford in June 2016. It’s past that now, but with the nature of time travel being inherently prone to risks… do you really want to chance it?

The Eyre Affair by Jasper Fforde.