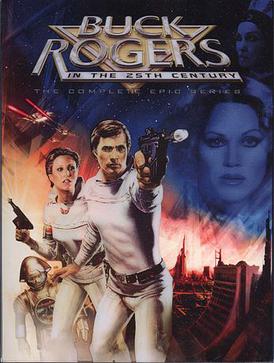 Buck Rogers lived in many comic book, novel, movie, and TV renditions, but the one I grew up with was the 1979 series starring Gil Gerard, which states that he launched into space in May of the far-off year 1987. Buck Rogers had a huge influence on science fiction for the next century. He is the original man-out-of-time (first appearance 1928 ) even before Captain America (1941). (I love Cap; don’t get me wrong!)  Buck’s stories were among the first popular ones to explore things like cryogenic freezing for space travel and post-apocalyptic worlds.

I also want to take this opportunity to give a shout-out to Star Trek: Voyager for basing Captain Proton almost directly on the Buster Crabbe black and white shorts (which were my dad’s favorites–thanks, late night PBS!). Those are some of my favorite episodes, Voyager.