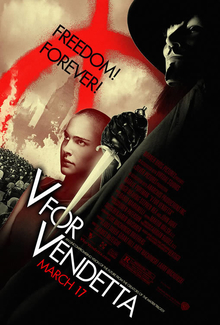 V is an anarchist freedom fighter in dystopian London who tries to incite a revolution by performing various acts against the government.  V for Vendetta was originally a graphic novel that was made into a successful movie in 2006.  The V/Guy Fawkes mask has become a sort of symbol against tyranny.

“Voilà! In view, a humble vaudevillian veteran, cast vicariously as both victim and villain by the vicissitudes of Fate. This visage, no mere veneer of vanity, is a vestige of the vox populi, now vacant, vanished. However, this valorous visitation of a by-gone vexation, stands vivified and has vowed to vanquish these venal and virulent vermin vanguarding vice and vouchsafing the violently vicious and voracious violation of volition. The only verdict is vengeance; a vendetta, held as a votive, not in vain, for the value and veracity of such shall one day vindicate the vigilant and the virtuous.”