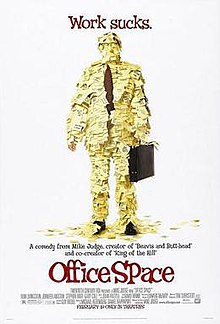 Powerful people are sent to basements.  So to give hope to those us who live/work in them, we are featuring some inspiring basement-dwellers.

Milton Waddams (played by Stephen Root) is the adorable cog in the machinery who threatens to burn the place down.  As he says:

And I said, I don’t care if they lay me off either, because I told, I told Bill that if they move my desk one more time, then, then I’m, I’m quitting, I’m going to quit. And, and I told Don too, because they’ve moved my desk four times already this year, and I used to be over by the window, and I could see the squirrels, and they were merry, but then, they switched from the Swingline to the Boston stapler, but I kept my Swingline stapler because it didn’t bind up as much, and I kept the staples for the Swingline stapler and it’s not okay because if they take my stapler then I’ll set the building on fire…

Milton ends the movie pretty well, as you may recall.  And–in our favorite case of fiction influencing fact–Swingline never made a red stapler until fans of Office Space kept contacting them to demand one.  Fiction wins!